Skip to main content
It looks like you're using Internet Explorer 11 or older. This website works best with modern browsers such as the latest versions of Chrome, Firefox, Safari, and Edge. If you continue with this browser, you may see unexpected results.

Quiz and Tutorial to test your knowledge on library online resources you will use in your classes. The same quiz is available within the Online Student Orientation in Blackboard.

What Can the Library Do For You?

Not all information can be found on the Web. Librarians are here to help you retrieve material in the research process. We hope this tutorial is not the only time you seek the library's help.

There may come a time in your academic career that your instructors require you to get a book source. Here is a video of how to search the catalog.

How to Search the Catalog Transcript page 1, page 2

Using a website for an assignment is not as simple as going to your favorite search engine and using the first few links as your sources. You must critique a website for accuracy, currency, and authority to be able to use it in an academic paper.

Are they professionals in the field or an individual who has created the webpage for their own purposes?

Websites- Glance at the URL to see if the website is credible, especially the ending of the URL:

- - - .edu- an educational institution has created the page and is a credible source for an assignment

- - - .gov- a governmental institution has created the page and is a good source of information

- - - .org- analyze content carefully, usually are excellent sources of information, however, some are created to persuade rather than give unbiased                information.

- - - .com- be critical of information, it may be commercially motivated

Do not cite Wikipedia.org as a source. According to their website, "...visitors do not need specialised qualifications to contribute, since their primary role is to write articles that cover existing knowledge..." In academia, you are expect to use reputable websites as your source.

Which Source Would You Choose?

Here is an example of two websites on President Abraham Lincoln. By examining the two websites using the criteria above, which would you choose for a source for an academic paper? (Click on the image to go to the website) 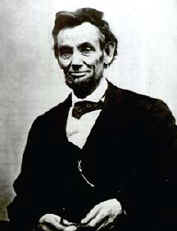 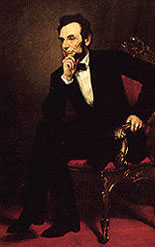 If you selected the website on the right, you are correct!!!

Students will learn the following objectives:

It is important to give credit to where you found your research. Plagiarism is not always done purposely.There is accidental plagiarism and blatant plagiarism. Accidental plagarism occurs when a writer fails to cite (also called quoting) his or her source completely or correctly. Blatant plagiarism occurs when the writer copies their source word-for-word without noting it as a direct quote or giving credit to the source. Changing a few words of the quote and not giving credit is also plagiarism. Certain websites, such as turnitin.com, allow instructors to check your work against articles that have been published or papers written by other students. If caught plagiarizing you risk getting expelled from college.

How do you know when to cite?

Cite every piece of information that is not the result of your own research or common knowledge. This includes opinions, arguments, and speculations as well as facts, details, figures, and statistics.

When do you use quotes?

Use quotation marks every time you directly copy the words of another. For longer quotes , more than 40 words, you must indent the whole quote (called a block quote).

Are there rules to using too many quotes?

In an academic paper, it is best to not add too many direct quotes. It is best to only use direct quotes when the phrase loses meaning otherwise. Paraphrasing (or indirect quoting) is a summary of the authors work in your own words, it is viewed as better than directly quoting information. You must reference your source even when you paraphrase.

Why quote or paraphrase?

When you include a quote or indirect quote you must include an in-text citation, also called parenthetical documentation, within your paper referencing your sources list at the end of the report.The last page of your paper will be your list of sources known as a bibliography, reference list, or works cited. There is certain formatting associated with creating your in-text citation and works cited page. The two most common formatting styles are MLA and APA, the style you use is dependent on your course as well as what your instructor prefers.

MLA is primarily used in the humanities fields including Engish, foreign languages, and history and government

Note: Standard report formatting includes your last name and the page number in the header. Your heading on your first page will be your name, instructor's name, course number, and date. Double-space entire paper and create in 12-point, Times New Roman font.

Note: Within MLA, 7th edition, an in-text citation includes the author's last name and page number in which the information was found.

The example above lists the author's name in the sentence of the reference with the page number the quote is from in parenthesis after the quote with a period following.

In the example above, the sentence does not indicate who said the quote. The parenthetical documentation following the quote lists the author's last name with the page number in which the quote is found, following with a period.

EX: Paraphrase: Wordsworth extensively explored the role of emotion in the creative process (263). The example above is a summary of the author's words, but credit still must be given to the author. Wordsworth's name is presented in the beginning of the sentence so all that is needed in the parenthesis is the page number.

Note: Within MLA, 7th edition, the works cited page will be in alphabetical order by author's last name, first name. A hanging indent will be on every subsequent line after the first of each reference and it will be double-spaced throughout. See last page of MLA sample paper above for example of works cited page.

APA is used in the field of psychology, sociology and social work

Note: Standard report formatting includes a "running head" in the header, listing a shortened version of the title of your paper in caps flush left and the page number flush right. On the center of the first page, will be the title of the paper, your name, and institutional affiliation. Every subsquent page will continue with the running head and page number noted.

Note: Within APA, 6th edition, an in-text citation includes the author's last name and year of publication should appear in parenthesis. Only is using a direct quote does the page number need to be given.

EX: Direct Quote- According to Jones (1998), "Students often had difficulty using APA stule, especially when it was their first time" (p. 199).

EX: Direct Quote- Jones (1998), found "students often had difficulty using APA style" (p. 199); what implications does this have for teachers.

EX: Direct Quote- She stated, "Students often had difficulty using APA style" (Jones, 1998, p. 199), but she did not offer an explanation as to why.

The example above does not list the author's name in the sentence or quote, it then must be included in the parenthetical documentation along with the year and page number.

The example above is a summary of the author's words, but credit must still be given to the author. Jones' name is presented in parenthesis following sentence with the year of publication after.

Note: Withing APA, 6th edition, the works cited page will be in alphabetical order by author's last name, first initial. A hanging indent will be on every subsquent line after the first of each reference and it will be double-spaced throughout. See last page of APA sample paper above for example of works cited page.

You will learn MLA or APA citation in detail throughout your classes.

Within our electronic databases, such as Gale and EBSCOhost, the elements necessary for creating a source citation are not only given to you but presented in the correct format!

Students will learn the following objectives:

Coastal Bend College Library has made it easy for you to be able to retrieve scholarly articles and material for your assignments through our research guides. The following video will lead you through the library databases and research guides:

Navigating the Databases and Research Guides

Here is an example search of how to locate an academic article within EBSCOhost:

After watching the presentation above, match the following Boolean Operators (AND, OR, NOT)  with corresponding questions:

1) I want information on cats, but I don't want to see anything on dogs

2) I'm interested in finding the relationship between poverty and crime

3) I'm looking for information on diseases found in mice, rats, and rodents.